A large seascape of the tall ships with their escorts in the race at Falmouth by John Alford. He has exhibited at the Royal Academy,Royal Society of Marine Artists, Royal Society of Portrait Painters, and Royal West of England Academy. His style is impressionist and gives a freshness to his work and a sense of the open air. 2ft 4 inches high by 3 ft 5 inches wide. £420. sold. 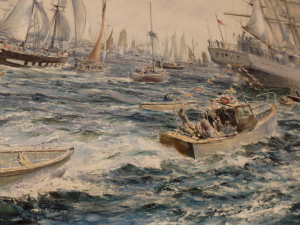 An embroidered sampler with a quotation from a war time speech by George VI, and showing the uniforms of the Women’s Home Services such as the W.I ,W.V.S and Land Army. £89.

An impressive pastel painting of a dog’s head by Alexander Rasmussen. £160

Four engravings by a well known Italian artist Ignatius Nicoli 1921 –  1989.  He was famous for frescos, and although he

executed some impressive landscapes , practised the technique of engraving, etching and drypoint in particular. priced at £180 each. newly framed and mounted.

A Roger Lersy  painting priced at £350.   A French painter whose works are very popular in America and UK.  (See full information on additional painting) these paintings are now sold

He composed classical music and studied Art at the school of Applied Arts in Paris. First exhibited in 1946 at the age of 26, and then in London, Geneva, Los Angeles, Houston and New York. He won the Prize of the City of Marseille  in 1955, and Prix de Amateur d’Arts in 1953. Numerous works have been sold at auction. In May this year London Bridge was sold for $1,000 and on the 30th December “Travaux” for £1,507. His works have been puchased for many private collections, and others have been acquired by City Councils. His Piano NOir” was sold at Bonhams,San Francisco, in 2011. This painting is priced at £350.

Pair of 19th century French watercolour miniatures in gilt brass frames with velvet mounts. They have easel backs and meaure 10″ by 7″. On the reverse is the name Giroux a Paris. £1,250.

19th century french watercolour miniature of two cherubs in gilt brass frame with velvet mounts. It has an easel back and measures 9 inches by eight and a half inches. It has no name on the back, but two miniatures (also illustrated) with matching frames are marked Giroux a Paris.  £950.